Through the Language Glass: Why the World Looks Different in Other Languages 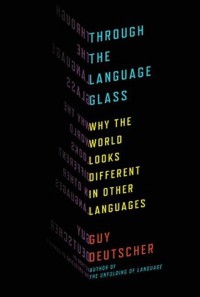 I really enjoyed this book, even though, or maybe because, it was not at all what I expected. I was expecting a kind of language survey detailing the ways in which various languages differ from each other that might possibly be related to culture. For example, the rather overplayed number of different words Inuit has for snow. I did not expect a very well written argument against some of the widely accepted tenets of linguistic theory, such as the Chomsky/Pinker belief that language is an inborn instinct not affected by environment or culture or that all languages are equally complex. Instead, Deutscher demonstrates both ways in which culture influences language -- the "language mirror" -- and how language influences culture -- the "language lens".

I'm not sure he entirely makes the case for his positions. Although his examples are detailed and well demonstrated, there are relatively few of them. However, I got the impression he was not expecting to totally overturn linguistic thought, but instead to reanimate a discussion that had been unfairly discontinued. I felt like what he was really objecting to were the absolutes of previous theory. Deutscher says that language is more complex than we thought, or than linguistic scholars thought. He doesn't specifically deny the existence of a language instinct, but says that there's a lot more to it than that.