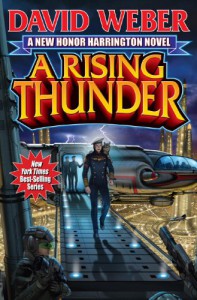 This is an ARC, e-book copy.

This book is a little unusual for Weber. No lengthy descriptions of technology or weaponry. No lengthy space battles; what confrontations do occur are averted or resolved quickly. Also, not very much Honor Harrington.

However, it's well written and engrossing as usual. And it's a logical progression in the saga of the Star Empire of Manticore and the very complex political situation of human space.

I enjoyed this book. My two complaints are:

(1) It's lack of focus on any particular person. Weber's longer books always seem to be rather diffuse because he brings in so many people and different viewpoints. Sometimes that's good, and sometimes not. But he usually has a central focus on one character. Not here.

(2) It is apparently the first part of a much larger work. It kind of stops in the middle, with much unresolved. And, of course, there's no telling when the next installment will be available.

[9/27/2015]
After my second read. I actually enjoyed it much more. Maybe because it was in the midst of a reread of the entire Honor Harrington mainline series, so the events in the preceding books were much more immediate to me. This book seems to followup on a lot of the things that happened in the last book or two. They were therefor more meaningful for me.
Tweet