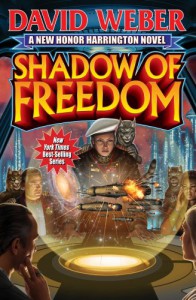 Second Read
I enjoyed it more this time. It is still annoyingly incomplete, but I think this time through I had a better appreciation of the scope. When you are trying to depict a galactic empire falling apart, it is probably necessary to focus sometimes on the peripheral action, the multitude of liberation activities among the verge worlds. It helps to understand the pressures that are gathering against the Empire of Manticore. But it makes it more frustrating when it stops at a critical time.

There is some real action in this book, from the attack in Saltash to the liberation of Mobius to the capture of the Meyers System. However, it still have a number of slow patches. Not the kind of "data dumps" that Weber is famous for, where he spends a chapter or two describing space hardware in excruciating detail, but long conversations -- long boring conversations that are more like speeches or reports than actual conversations -- that seem to be a device to advance the plot without having to get into that nitty gritty of action.

Still worth reading if you're a fan of the Honorverse.
Tweet