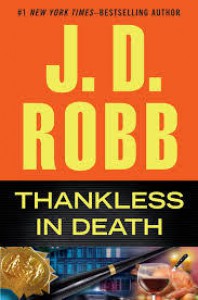 [11/29/13]
The last couple installments in this series that I read seemed somehow less -- as if maybe the author was getting tired of the series. But that wasn't true of this one. It was also a little different than the norm of the series (if there is one).

This one could almost be subtitled "The Making of a Serial Killer" because the action follows a single man who almost accidentally makes his first kill and discovers he likes it, then sets out to explore this new activity. Eve Dallas is sharp as ever in tracking the perp, but still has trouble keeping up with him.

An enjoyable detective story, as always, with plenty of personal action in the lives of Eve and Roarke, including one surprise.
Tweet